Broken timing belt: symptoms, noises and what to do 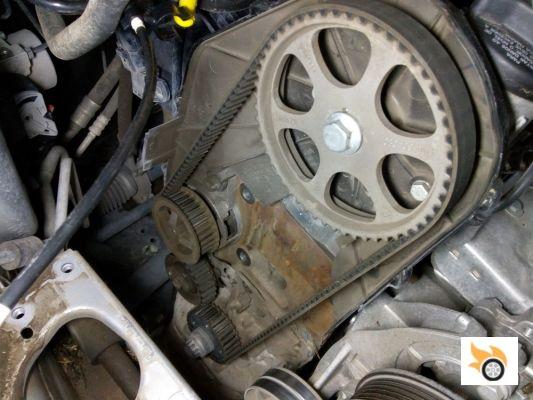 What are the symptoms of a broken timing belt?

For this reason it is essential to know what the symptoms of a broken timing belt are in order to be able to recognise them and act promptly.

The symptoms of a broken timing belt are different but equally important, here is a short list (detailed explanation below):

If you notice any of these symptoms, our advice is to go for a visual inspection. Of course, you should be able to see the timing belt which, in modern cars, is often hidden behind other components. However, if you can see it, any signs of wear, tear or scoring are an indication that the timing belt has reached the end of its life.

First symptom of a broken timing belt: the engine ticking.

If you hear a strange ticking sound coming from inside the engine, then stop the car immediately. After stopping, open the bonnet safely and, paying attention to the hot parts of the engine, visually check the condition of the belt.

If you can locate the timing belt and it looks damaged, frayed or completely broken, then you have a problem. Don't move the car, but call a tow truck immediately. This may cost you extra money now, but we guarantee you will have saved thousands in damages from the mechanic.


In some cases this ticking can also indicate low engine oil pressure. However, if the oil level is within normal parameters, have a mechanic inspect the timing belt immediately.

You turn thekey, the ignition turns on and you hear the usual noise but the engine won't start. What could it be? We can exclude the battery and the alternator as we have electricity from the moment the ignition is switched on.

We can also exclude the starter motor as it receives electricity from the battery and works correctly (in any case we have an article dedicated to the symptoms of a faulty starter motor).

Therefore, by exclusion we can deduce that the problem is a broken or torn timing belt. The main engine does not start because the belt, damaged or broken, does not transmit the power produced by the starter motor to it.

This is one of the "best" symptoms of a broken timing belt because, as the car is parked at a standstill, it is much less likely to cause serious damage to the engine.

If the engine misfire light is on or flashing, one of the possible reasons is a timing belt problem. The yellow misfire light can come on due to many problems and is in fact one that should never be underestimated.

Among the many problems, the light can clearly indicate the presence of a problem within the engine. If the problem is the timing belt, the warning light will normally display one or more camshaft or crankshaft fault codes.


The camshaft and crankshaft are, in fact, the two key engine components whose proper operation depends on the "timing" due to the timing belt. No timing belt equals "crankshaft" problems.

The fourth symptom of a broken timing belt: a blown engine.

If you hear a crackling sound coming from the engine compartment, you should stop the car immediately and turn off the engine. This crackling noise can be caused by many factors, some as trivial as the engine metal heating up.

However, the crackling can also be due to a broken or worn timing belt. In this case some of the cylinders may not be synchronized with the opening of the respective valves. This is because the worn belt does not cause the gears to rotate in sync.

The result is an unsynchronized engine movement that will cause thousands of euros of damage in a short time if ignored.

5th symptom of a broken timing belt: sudden loss of power on the move.

Finally, one of the most typical symptoms of a broken timing belt is the sudden loss of power while driving.

The timing belt is made up of teeth that engage the gears and make them rotate together, only one of which has to break to compromise the timing function of the belt.

At the same time as the loss of power (or immediately after) the engine misfire light will come on and this will be the definitive sign of a problem for the car. Our advice is to stop the car immediately and make sure of the problem. If you are not a mechanical expert, it may be time to call a tow truck or your mechanic. If you don't know a good mechanic, you can try to find a mechanic at home using our platform.

What noise does the broken timing belt make?

As explained above, there are different types of timing belts. Some of them are designed to make a distinct noise when they are about to break. This noise usually resembles a "plastic squeak", as if we are tearing pieces of plastic.

However, the timing belt is not the only component of the timing kit that makes a noise if it is damaged.

These noises clearly indicate that the timing kit components, belt or bearings that they are, are not functioning properly. In the long term, therefore, they can break or become misaligned, potentially causing serious engine damage.

The best advice is to open the bonnet and check that there are no obvious problems with the timing kit components, as long as they are visible without removing other parts. If you are not an auto-mechanical expert, we always recommend that you use an expert who knows how to make a correct diagnosis.

What to do if the timing belt breaks?

If you fear that the timing belt will break, never, ever start the engine. Whether you're driving or parked, it's best to turn off the engine (park if you're on the road) and call a mechanic immediately.

What to do if the timing belt breaks while driving?

Most of the time the used belt will break when under tension, i.e. while driving. This makes it essential to know how to react if the timing belt breaks while driving.

The procedure to follow is really: stop, turn off the engine and call a mechanic. That's it. Unless you're a mechanic with all the tools behind you, there's nothing you can do to fix the problem. You can make the situation worse if you decide to keep driving, causing pistons and valves to clunk in the engine and become irreversibly damaged.

Can you walk with a broken timing belt?

Absolutely NOT! Under no circumstances can you walk with a broken timing belt unless you want to seriously damage your car.

Walking around witha broken timing belt in a few minutes will cause serious damage to the engine. To repair this damage the workshop cost will rarely fall below 2000 euros.

Our advice is to stop the car immediately and call for help as soon as you detect even one of the symptoms of a broken timing belt.

Where should the timing belt be changed?

Replacing the timing belt is a fairly simple operation that almost all mechanics are capable of performing. You can choose to take your car to the head office or to one of the official network garages, but be prepared for a hefty bill. If you want to save money and get the same quality work, you can turn to Pistonudos.

Pistonudos is the platform at the service of motorists that allows you to find the best independent mechanic in your area, book the timing belt change and save up to 20% compared to the official network rates.

How can you tell if the timing chain is broken?

Many modern cars have a timing chain rather than a timing belt. This offers advantages in terms of durability but costs much more and can be noisier.

To the question "how can you tell if the timing belt is broken" the best answer is always to check for the symptoms of a broken timing belt.

Although structurally very different, the timing belt and timing chain do exactly the right job. If they become damaged or worn the symptoms are therefore the same.

How do I know if my timing belt is broken?

The rumbling of the ticking sound under the hood The car will not start, but the battery and starter motor are OK.
The engine fault light is on or flashing.
Engine crackling from inside the engine.

What to do when the timing belt breaks?

Wear, lack of maintenance or a mechanical inconvenience, among many other causes, can cause the timing chain to break suddenly, even when the vehicle is running.
In cases where the belt breaks or cuts unexpectedly, the engine loses its synchronization.
1 june two thousand eighteen

What happens if the belt makes noise?

If a vehicle's accessory belt drive system is rumbling, it is more than likely the origin is in the fan belt due to misalignment of the pulleys; too low a tension or the presence of a faulty, or worn, component in the system.
13 sept two thousand sixteen

Why does the head gasket burn out?

Why does the head gasket break? This part is not prone to break down by itself, but rather due to deterioration.
It is usually caused by excessively high temperatures or water leakage, causing the gasket to burn, become irregular and, since it does not perform its sealing function, it ends up damaging the entire engine.
22 may two thousand and nineteen

add a comment of Broken timing belt: symptoms, noises and what to do